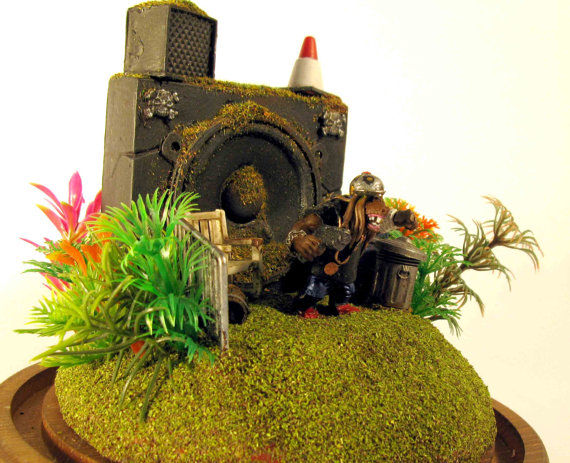 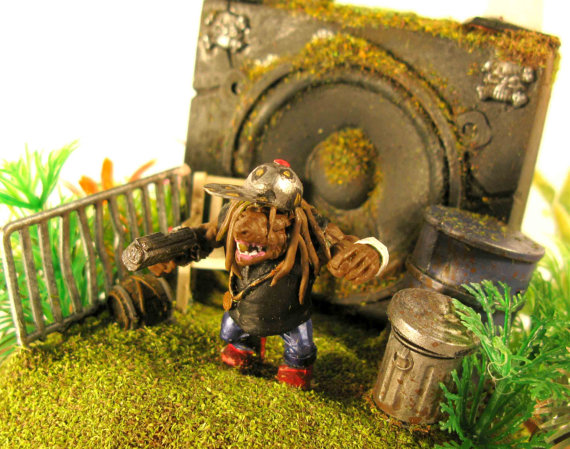 Webbo works from his studio in east London, creating work that ranges from wall mounted fine art sculptures to miniature war figure character conversions that draw influence from urban fashion and modern subculture. He uses a wide variety of traditional techniques as well as many of his own home grown solutions to model making problems. He brings together old toys ,pound shop junk, model railway scenery, animal bones , foam board ,old speaker cones, plaster of paris , specialist sculpting materials and discarded rubbish to create piece by piece a world limited only by his own imagination. Drawing style and influence from the art toy movement ,trashy pop culture, fashion , high brow contemporary art, science fiction , modern counter culture, war memorial reliefs ,gangster rap, rave culture ,street art imagery, graffiti aesthetics and ancient religious monuments and bringing it in to skilfully produced toy hacks and sculptures that although very different from each other and working as independent pieces still share a common thread tying them all together within the same universe. He creates a window in to a world most people grew out of, he makes art that is fun and free from the restraints of what is expected in the mainstream art world tapping into the collective imagination of a lost generation raised on sci-fi films and junk food entertainment. During his time studying Mixed Media Fine Art at the University of Westminster he focused mainly on spraypainting and graffiti but began to experiment with 3d work planting the seeds of what would become his future practise.