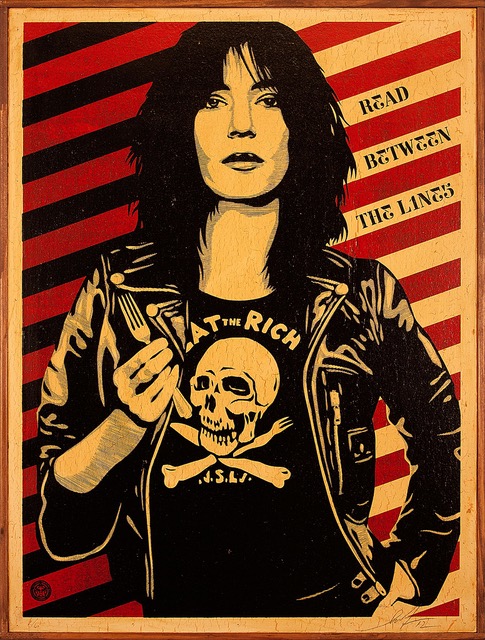 Shepard Fairey was born in Charleston, S.C. He received his Bachelor of Fine Arts in Illustration at the Rhode Island School of Design in Providence, R.I. While there he created the “Andre the Giant has a Posse” sticker that transformed into the OBEY GIANT art campaign, with imagery that has changed the way people see art and the urban landscape. His work has evolved into an acclaimed body of art, which includes the 2008 "Hope" portrait of Barack Obama, found at the Smithsonian’s National Portrait Gallery.

Fairey’s 25-plus-year career started in 1989 with his sticker campaign. In addition to his guerrilla street art presence, the artist has executed more than 50 large-scale painted public murals around the world as of 2015. His works are in the permanent collections of the Museum of Modern Art (MoMA), the Victoria and Albert Museum, the Smithsonian’s National Portrait Gallery, the Boston Institute of Contemporary Art, the San Francisco Museum of Modern Art, and many others.

Last September, Fairey opened “On Our Hands” with the Jacob Lewis Gallery, his first solo painting show in New York since 2010. The exhibition was the gallery’s inaugural exhibition of the artist’s work as his representing gallery in New York. The show coincided with the artist's most recent monograph release, Covert to Overt (Rizzoli).

In summer 2016 Fairey collaborated with legendary photographer Jim Marshall’s estate on “American Civics,” a series of new works interpreting the iconic photography of Marshall and vividly depicting the humanity behind some of our country’s enduring social justice issues.

Also opening on June 24 at Galerie Itinerrance in Paris is “Earth Crisis,” the artist’s solo show featuring new original works. This exhibition is an extension of his groundbreaking Earth Crisis Globe installation at the Eiffel Tower, which was up following the November 13, 2015, Paris Attacks and through December of 2015. “Earth Crisis” is Fairey’s latest environmentally-themed art created as a call to action to protect our planet.

Most recently the artist completed a career survey museum show in Hong Kong at the HOCA Foundation entitled “Visual Disobedience” which consisted of 290 art pieces, as well as three painted murals, and a collaboration with streetwear brand Fingercroxx.